What Do We Know? 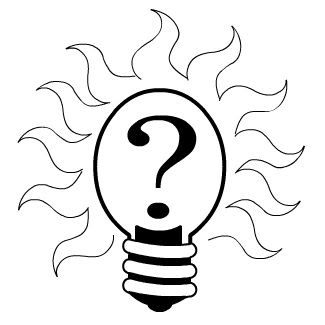 Why are these questions so much more satisfying than the so called answers?

What do we know?

I AM in this moment what I AM 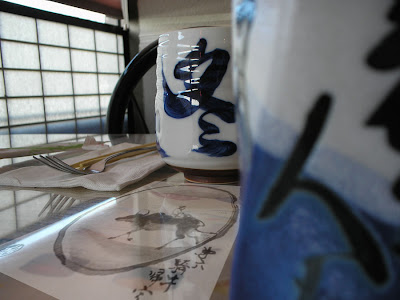 But congested cognitive maps
Tangled with twisted developmental lines
Just add to the confusion of my
Moral, interpersonal, emotional,
Psychosexuality, know what I mean?

Spiraling around the value core
I desperately want to survive this magic
This impulsive, purposeful achievement
I want to commune with the starry net
That holds the world within the heavens

But I have to take my ox to the marketplace
Afterwards, maybe we can get together for a time
Over tea at that little café near the traffic circle
You can always get a window seat
And I will join you there
Posted by Jay Larsen at 2/27/2007 12:05:00 PM No comments: 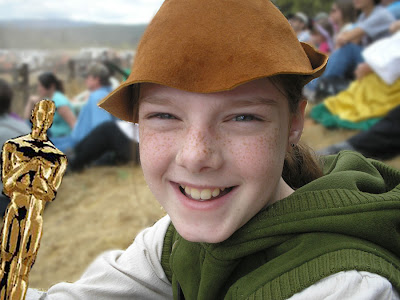 Sunday was Oscar night. The red carpet was rolled out. All the pretty starlings were wearing their designer dresses. All the networks were there, cameras flashing, video rolling. So I think I should give you the Thunder Echo Review of Oscar Night 2007.

I didn’t watch the Oscars.
I watched Anna & the King, which I believe won an Oscar once upon a time, with my family. It was a great movie. And my youngest got some idea of why her teachers told her she reminds them of Jody Foster. She is a strong-willed girl with a lot of brains and a huge heart. Chani gets my nomination for best 6th Grader in a starring role.

I heard on the news this morning that Little Miss Sunshine got an award. I saw that movie and thought it was hilarious. I thought it was a great view into dysfunctional American families. So I’m cool with that one.

I heard that An Inconvenient Truth won Best Documentary. I own a copy on DVD and I have read the book. It was a well produced documentary about a topic that should be a no-brainer for anyone who has been paying attention for the last 30 years. But I keep forgetting that people don’t pay attention. I’ll have to pay more attention to that. 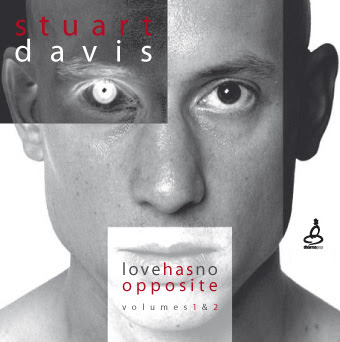 I have advance tickets to see Stuart Davis live at the Tractor Tavern in Seattle next Saturday, March 3rd.
Stuart Davis is one of the most interesting musical artists I have been exposed to in years. And he has strong connections to Ken Wilber and the Integral Institute. I will be sure to give a review after the show. But if you are in the Seattle area and love quirky well played pop music with real depth, then get your arse to the show this Saturday.
Posted by Jay Larsen at 2/26/2007 11:51:00 AM No comments: 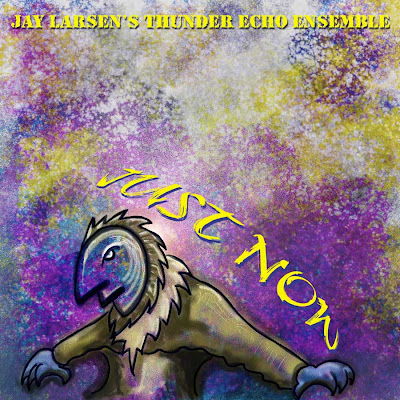 A guy at work asked me the other day, “Thunder Echo Ensemble, what the f@#% is that?” I was wearing a TEE Shirt with the cover of the new CD on it.
(The new Thunder Echo Ensemble CD, Just Now, is available FREE by the way, so go download it.)
So I said, “Thunder Echo is a band that I am in.”
That was a good enough answer for this particular guy, but I knew that it went much deeper than that. So here is my attempt to answer that question in a more genuine way (even though you didn’t ask).

As a young man and a young artist I tried really hard to be original. But I found that my artwork was always directly or indirectly derivative. And the more I studied other artists’ work the more I realized that nobody was doing original work, nobody. That got me interested in collage and other methods of directly exploring how artists create new combinations of elements instead of creating new elements.

Take the cover of the new CD for example. Now this illustration would traditionally be called an original work of art. I sat down with a blank canvas and drew things on it. But as the artist I can tell you that there is very little originality in this piece. I have been exposed to a wide variety of art and artistic techniques in the past. I have looked at thousands of paintings and thousands of comics. I did not invent the concepts of Eskimos or shamans or ceremonial masks. I took all these things and put them together at a specific time and place. And the results are rather pleasing (if I do say so myself). It is a drawing. It is art. And that is okay. But it is not original (Everybody is a critic).

I also do a lot of visual collage work, where I literally take other peoples’ images, cut them up and reconstruct them into new configurations. And I think collage is just as legitimate as that CD cover illustration. It is just a little easier for others to see and trace the influences and components of a collage.

When I make music I do the same thing. I collect influences and actual bits of music created by others. I use computer programs to help me sequence these bits into interesting new configurations. I add a few bits of my own: vocals, keyboard parts, etc.. I am basically a musical collage artist as well.

So when I wanted to share my music with other people I did not think it was entirely fair to say, this is my Original Music. I feel there are very few lightning flashes of true originality in music (or anything else). Most of us are lucky if we can get close to the thunder from those flashes once in a while. And with my musical talent (or lack there of), I figured I was lucky if I could capture a few distant echoes of the thunder. That is how I came up with the name, Thunder Echo. I thought about calling it the Thunder Echo Assembly, because of the collage aspect, but I settle on the Thunder Echo Ensemble because it sounds more musical.

That is my theory and why I call my music and my blog Thunder Echo. And you can take that, chop it up and rearrange it if you can manage to create something interesting out of it.
Snap! Crackle! Pop Music!
Posted by Jay Larsen at 2/23/2007 04:15:00 PM No comments: 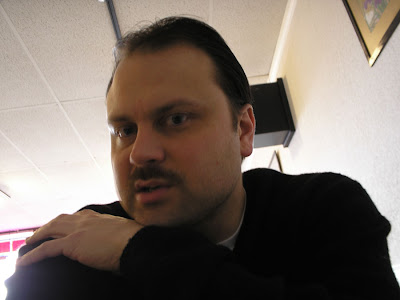 Have you written a poem today?
I ask him what topic I should
Riff and ramble and rant about
But he says I am the poet
I should decide
Then he asks if I know
The emperor of ice cream
Because I should have written it
Instead of Wallace Stevens
Because I say shit that makes no sense
Like “let the lamp affix its beam”
As he crumples his Cliff Bar wrapper
And casts it away, cold and dumb
Mike becomes the prince of nondairy creamer
Posted by Jay Larsen at 2/22/2007 08:54:00 AM No comments:

Jay Birds Want to be FREE 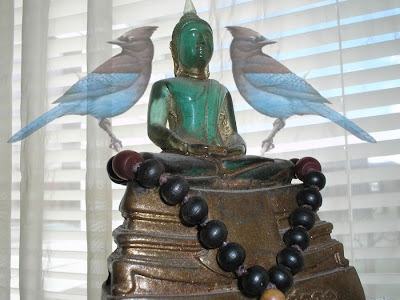 Here’s a funny story. The local Seattle news, King 5, reported over the weekend that people all over Western Washington were scared and concerned about a mysterious white powder that was found on people’s cars and homes. Was it anthrax? Did terrorist fly a plane over the Puget Sound and distribute some horrible bio-weapon? Well King 5 paid a lab to analyze the mysterious substance and it turned out to be tree pollen. Pollen from pine trees.

Everyone is so worried about security these days. National Security, Homeland Security, Security Systems, Airport Security, Port Security, Social Security. Now we are even afraid of trees. TREES. Do we need a Department of Tree Security?

Let me clue everyone into a little secret: There is no such thing as security. Nothing is secure. No place, no person, no thing, no process can ever be secure.

Now I am not entirely sure that freedom actually exists either. But I would rather spend my life chasing Freedom than locking myself away in fear trying to find Security.

I was trying to keep two blogs going. Thunder Echo was all about art, music, poetry. And Black & Blue Heart was about politics and society. Well I have decided that those self imposed boxes were an attempt at security. I was trying to keep my art clean and my politics away from the people I work with. But I am going to throw those distinctions away in the name of Freedom.

From now on, I am going to post what ever I want about any topic on this blog, Thunder Echo. There will still be art, poetry and music. But there will also be politics and society and philosophy. It may get messy, but it will be free. And Jay Birds want to be Free!
Posted by Jay Larsen at 2/20/2007 04:10:00 PM No comments: 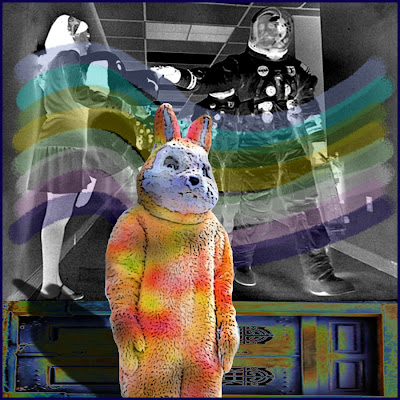 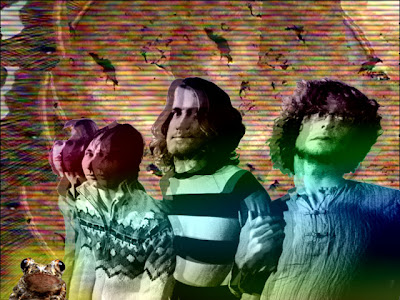 Mosquitoes in the Net 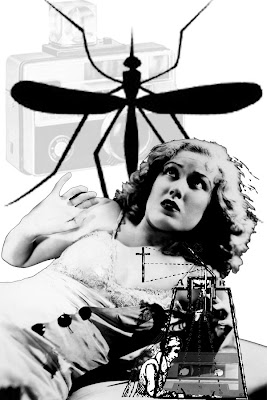 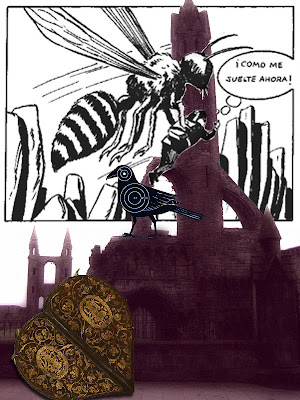 Which is more tragic?
The constricting squeeze
Of certain answers
Or the black spaces
Of a question mark?

My heart flutters
Like dark wings
Rising from carrion